While Claterbos does not record a Rezek, this is not surprising since his Claterbos primarily documented clock and watch makers in Vienna, while this clock is from Jindrichuv Hradci, a town in Czechoslovakia roughly 100 miles north west of Vienna. (KELLY - COULD YOU DO A GOOGLE SEARCH ON THIS TOWN, TRY BOTH THE SPELLING ABOVE, AS WELL AS HRADEC (THIS BEING THE SPELLING I FOUND IT UNDER))

This clock, with many features that are clearly the result of its Viennese heritage, is an excellent example of why provincial Vienna Regulators can be so desirable. The most unusual feature is the mechanism mounting bracket - in the form of a capital R, as in Rezek, the maker. In fact, the same theme is repeated in the design of the crutch with its highly unusual piercing. Then there is the case - clearly of the 1850 to 1860's, yet with a rather individualistic, perhaps Czech style. Thinner than one would expect for this big of a clock (the body being five and a half inches deep), and elegantly narrow, it just feels different from the dimensions one is used to in a Viennese piece. Slender, long (66 inches), in nice condition - this clock looks even better in person than in the photo’s. Note the very fine finials, with very delicate turnings, the applied adornments, a rater nicely detailed case.

Then there is the pendulum: A beautifully executed bi-metallic faux grid-iron that is surprisingly well made - as I have tried to show in the accompanying photos. And, equally elaborate and unusual is the way the mechanism mounts - hanging from a point on the elaborate gong mount, with two legs that pass thru the backboard. If you are familiar with clocks made by the noted Viennese clock-making partners Elsner (Josef) & Petrovits you have seen the “hook and two points” mounting method. While this was rarely seen in Vienna after 1840, it is not too surprising to see it in a later, provincial piece. And, as with the Elsner and Petrovits clocks, the pendulum hangs from the same bracket from which the mechanism hangs.

Note too the matched set of 5-spoked pulleys, the very nice, heavy, zinc-backed bob, original wall stabilizers, the perfect dial with the beautifully scripted makers name, the sculpted hands, the old glass to the sides with later door glass, and original beat scale in very nice condition, even the winding key is a bit different with its unusual wooden knob.

The finish on this clock is in truly beautiful condition - yes, it could use cleaned and waxed, but you would not go wrong just hanging it as it is.
Read More 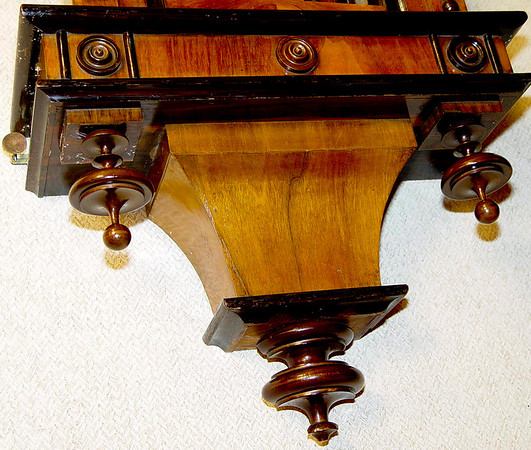